Teens at Risk – Marijuana and Vaping

Teens at Risk – Marijuana and Vaping

If young people are hearing that marijuana is fun and harmless because it’s natural, then they’re missing the facts. Marijuana contains over 400 different chemicals, is highly addictive and is more potent today – with 300% more THC than 1970’s marijuana.

Marijuana contains up to four times the amount of tar as tobacco, and can wreak havoc on your teen’s brain development and future. Using marijuana can affect the amount of oxygen getting to their brain, can make it harder for teens to feel good when they aren’t using marijuana, and can impact their athletic, educational or career opportunities.

What Can I Do As A Parent?

What You Say Matters!

Teens who believe their parents think marijuana use is wrong are 46% less likely to use marijuana, according to a recent survey of 10th graders. Reduce your teen’s chance of using marijuana by talking to them about the current and future dangers. 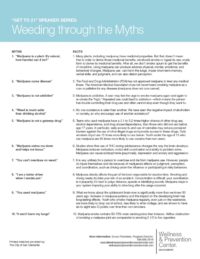 Weeding through the Myths