Sextortion – What Parents Need to Know to Keep Their Children Safe

Sextortion – What Parents Need to Know to Keep Their Children Safe

A parent recently reached out to me with a horrifying and heartbreaking story about his 8th-grade daughter. It was a story that had been going on for the better part of a year, and he was only now just learning of it. His daughter, Kelly, during her 7th-grade year, sent a topless image to her boyfriend. The relationship ended and the image that she intended for only one person to see was shared with others. On her last day of the 7th grade, Jason, a boy at her school, pinned her against the wall and forcibly grabbed her breasts. Kelly pushed him away. Jason smiled and said, “If you tell anyone, I’ll send the naked picture I have of you to everyone!” Kelly was terrified into silence.

I could hear the sadness and strain in the parent’s voice. He felt he completely failed his daughter. He noticed a change in Kelly following the attack. He described Kelly as “daddy’s little girl.” She would hang out with him and his wife, chat with them about school and her friends, but something changed. Now he knows why. The summer after the event, she became withdrawn, avoided him, and spent a lot of time in her room on her phone. He thought she was “going through a phase.” He heard teenaged girls sometimes do this and wanted to give her space. Looking back on it now, he realizes her reclusive behavior were warning signs she was in a crisis. Something was very wrong, and he felt horrible he missed it. Kelly was anxious and depressed. She had the daily feeling something terrible was going to happen to her. She was assaulted, violated, and then shamed into silence. It was like a heavy weight was wrapped tightly around her chest and dragging her under the waves. She said it felt hard to breathe sometimes.

Kelly went to a new school for 8th grade. She thought maybe the horrible experience of the 7th grade and Jason was behind her. As she settled into her new classroom, she looked up and saw Jason. There he was, standing in her class in her new school. How could this be? She felt the weight tighten again, pulling her down into a pit of despair. Jason walked up to her desk, bumped it with his hip and sneered. Kelly was transported back to the moment Jason pinned her against the wall three months earlier, she was trapped and didn’t know what to do.

After weeks of Jason harassing and intimidating Kelly, she finally broke. Kelly went to the school counselor’s office in a complete meltdown, and that is when she told her story. The counselor called in Kelly’s parents and revealed what Kelly had told her. They were being read into the final chapter of a horrifying story their child was starring in, but the story is far from over.

Kelly’s father was overwhelmed, fighting the emotional strain of a hurting child and his feelings of guilt and failure. Failure to help and protect his daughter. “I had no idea what was going on,” he told me. That summer, Kelly was texting back and forth with a friend who had witnessed Jason’s attack. Kelly was trying to deal with the experience the best she could with her friend. Kelly’s phone was off limits to her parents. Kelly’s father said he wished he hadn’t let her live through this alone. He wished he could have seen her messages on Instagram. I told him he could. I explained how to do this over the phone. I also demonstrate how to do this in my parent seminar.

He and his wife are now fighting for their daughter. I recommended professional counseling for Kelly as well as reporting the incident to the school district and law enforcement. Kelly has loving and engaged parents. I have full confidence they will successfully work through this with their child. Kelly’s father told me he and his wife will now be a part of their daughter’s digital world.

Sextortion can occur in other ways. It can happen over great distances. A shared intimate image with a stranger can open the possibility of extortion. In a famous 2012 case, Amanda Todd, a 15-year-old Canadian student, impulsively flashed her breasts to a web camera during an anonymous web chat. One of the anonymous viewers captured the image and threatened to send the photo to everyone she knew on Facebook unless she “went back on the camera and put on a show for him.” She refused, and he followed through with his threat. Police came to her home to inform her that the photo of her breasts was circulating on the Internet. On September 7, 2012, Todd posted a 9-minute YouTube video entitled, “My Story: Struggling, bullying, suicide and self-harm,” which showed her using a series of flashcards to tell of her experiences being bullied. The video post went viral after her suicide on October 10, 2012.

I show the Amanda Todd video in my parent seminar, “Parenting in the Digital World.” There aren’t a lot of dry eyes in the audience when the video ends. It is heartbreaking. Amanda’s mother is now an advocate and speaks publicly against bullying and sexual exploitation, but she desperately wishes she knew what was going in her child’s digital world. In my parent presentation, I tell parents, “Don’t wait for the phone call. Don’t wait for the bad news. The common denominator for nearly all cases of online abuse is an unfiltered, unsupervised Internet.” The good news is parents can filter and supervise it. You don’t have to be an IT wizard to do it. The vast majority of the online incidents I have investigated over the years could have been handled by a parent IF they knew what was going on before it spun out of control.

Steps to learn how to engage your child in their digital world: 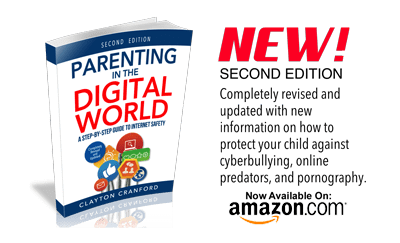