How We Teach Children to Be Safe Online

How We Teach Children to Be Safe Online 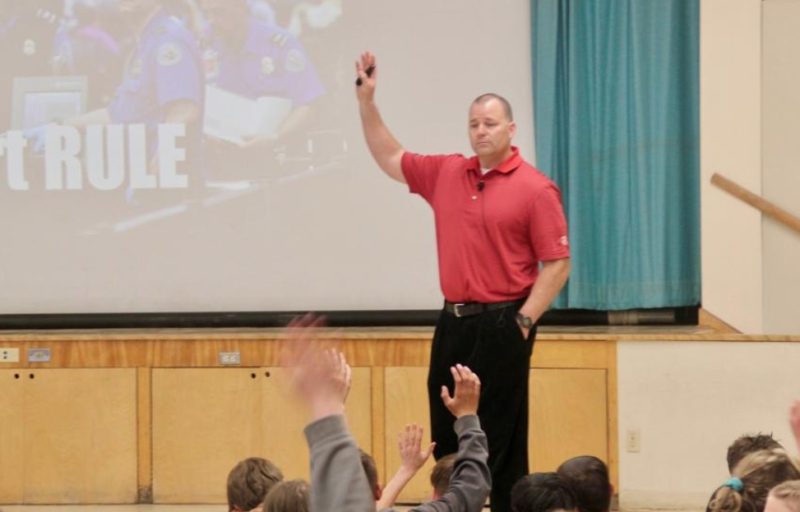 Whether a student is in high school, middle school or elementary school, chances are they will be using a cell phone to surf the web or connect with friends on social media. Guarding yourself against potential dangers is imperative, according to Cyber Safety Cop presenter Sgt. Michael Woodroof.

“What decision are you going to make — one that’s extraordinary, or one that’s devastating?” Woodroof asked Lucerne Valley students during one of four cyber safety assemblies at Lucerne Valley schools on April 18. “It’s a choice.”

Mindful of age-appropriate words and tone, Woodroof tailored each presentation to communicate the importance of using caution when going online.

“How long does something stay on the web?” he asked Lucerne Valley Middle School students who gathered for the event in the school gymnasium. “Forever,” Woodroof answered, and avoiding problems is a first step to using the internet. “If you wouldn’t want your picture on the home page of your school website then don’t take the picture.”

He said that young people need to think about choices that will help their lives in the long run.

“You’re brain’s not fully developed,” he said. “You’re not fully understanding the consequences. I’m thinking about the rest of your life, not how you feel at the moment. If you know you shouldn’t be there (at a questionable website), stop!”

“Sgt. Mike” explained that it’s natural for young people who feel lonely to seek affirming connections with others, but doing so without caution can be like filling up one’s emptiness with a drug. It can have decidedly negative consequences.

Woodroof shared several real-life examples to demonstrate the dangers. He talked about one 13-year-old girl, Julie, who began connecting online with a 56-year-old man. She ran away from home with the man, who was later arrested. Angry at the girl, the man threatened to kill her. He is now in prison for the next 25 years.

Social media is like your house, Woodroof said, when you accept or follow people who you don’t really know on social media sites it’s like you have let them inside your home.

High school students were shown a video made by Amanda Todd, a 15-year-old British Columbia girl who used a series of flash cards to share her story of being blackmailed into exposing her breasts followed by being bullied and physically assaulted. Soon after sharing the video the teen committed suicide.

Woodroof who has served as a school resource officer and community drug education instructor, shared one story with a happy ending, however. He showed a video of what happened to Daniel Cui, a Hillsborough high school soccer player who became a victim of a hateful social media post after the goalie allowed a score. Cui’s friends rallied in support and began a campaign to share a photo of him preventing an opponent from scoring. As a result, the student felt “10 feet high” and went on to improve his soccer skills and help win games.

“Guard your heart,” Woodroof said. “It’s the pathway to the rest of your life. Be wise in the choices you make.” 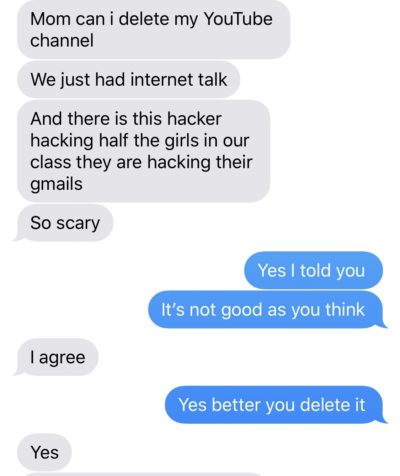 After our assembly, a parent emailed the principal a screenshot from a conversation they had with their child after the assembly. After the assembly’s discussion about not allowing strangers in your digital world, the student realized their Youtube Channel had opened her up to a potential threat. She decided on her own that she should delete her public Youtube account. Our goal when we speak to students is to change the way they think about their digital world and then call them to action to make safe choices online. We have been bringing our simple but powerful message to hundreds of schools and tens of thousands of students since 2012.

Schools can bring the Cyber Safety Cop program to their parents and students by visiting and filling out our contact form.

Michael Woodroof, known as Sergeant Mike by his students, is a law enforcement professional who has spent the majority of his law enforcement career helping children and parents as a School Resource Officer, Threat Assessment Team Member, and Gang Reduction Intervention Team Member. He has also been teaching parenting classes for several years in the South Orange County, California area. His passion for keeping children safe comes through as a husband and father of three boys, ages 11, 12, and 14-years-old.